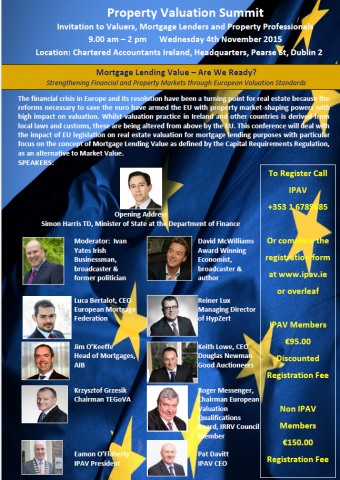 We are proud to announce IPAV, together with TEGoVA is hosting its inaugural Property Valuation Summit on Wednesday 4th November 2015.

This summit is one of the most important to be held in Europe this year and is a must for IPAV Members who are at the forefront of mortgage valuations.  IPAV & TEGoVA are leading the way in hosting what we believe is one of the most significant and interesting debates for Irish Valuers and the Irish economy in many years.

We are delighted David McWilliams, broadcaster, author and recently awarded the most influential economist across Ireland & the UK will be contributing to our debate, together with Minister of State Simon Harris TD and Ivan Yates, popular broadcaster & commentator. This summit will host first class speakers and experts; Luca Bertalot, CEO of the European Mortgage Federation, Reiner Lux, MD of HypZept, Keith Lowe, CEO of Douglas Newman Good, Jim O’Keeffe, Head of Mortgages AIB, Krzysztof Grzesik, Chairman of TEGoVA and Roger Messenger, Chairman of the European Valuation Qualifications & Council Member of IRRV England, as well as IPAV President Eamon O’Flaherty and CEO Pat Davitt.

Under EU legislation, valuations for mortgage lending purposes could significantly change with the introduction of Mortgage Lending Value as the new valuation standard as opposed to the traditional and familiar Market Value Standard so frequently used by Irish Valuer’s.  IPAV & TEGoVA are facilitating this debate to garner genuine commentary on this new standard, which is currently being used in some European countries, before deciding on its possible usefulness within Ireland.  The introduction of this standard could greatly change the landscape of mortgage valuations.