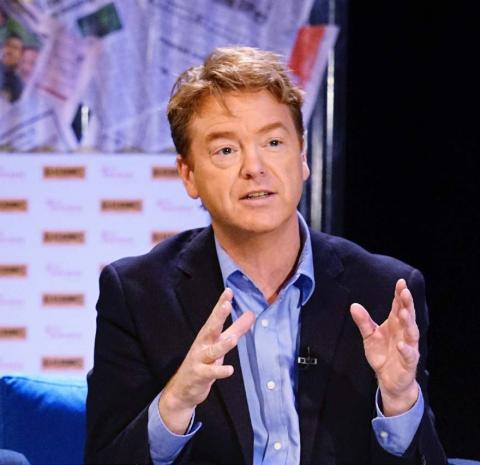 Shane Coleman is the presenter of Newstalk Breakfast. He is a former Political Editor of the Sunday Tribune and was previously that newspaper’s Business Editor. As well as being an award-winning journalist, he is the author of four books on politics, including ‘Bertie Ahern and the Drumcondra Mafia’.

Consistently accurate in his forecasts, David McWilliams was the only economist in Ireland who accurately forecast a strong UK Brexit vote. He was also the first economist to identify the Irish boom as nothing more than a credit bubble, warning of its collapse and the consequences for the country. His objective is to make economics as widely available and easily understandable on as many platforms as possible. He is a much sought after conference and keynote speaker. He was made a Young Global Leader by the WEF at Davos.

He is adviser to a number of major global investment funds and a regular speaker on the international circuit.  He is an economist, author, journalist, lecturer, broadcaster and documentary maker and has written four bestsellers, presented award-winning documentaries and has even brought economics to the stage, at Ireland’s Abbey Theatre. He is very active on social media and the third most widely followed economist in the world with 159,000 Twitter followers. David is also ranked Ireland’s most influential Twitter user”. He writes two economics columns a week and is a regular international contributor to the Financial Times. His daily global financial markets newsletter, GlobalMacro360.com is read by tens of thousands of his Twitter followers each morning all around the globe.

He is the co-founder of the world’s only economics festival ‘Kilkenomics‘, an eclectic combination of economics and stand-up comedy, described by The Australian as “Davos with jokes”. David has recently launched his new online economics course – “Economics without Boundaries” and his series of animated economics videos – Punk Economics – have been viewed by over 1,000,000 people so far.

Damien English TD, Minister of State at the Department of Housing, Planning and Local Government with special responsibility for Housing and Urban Development

Damien English T.D. is a native of County Meath.  He is the Minister for Housing and Urban Development based at the Department of Housing, Planning and Local Government.  He works closely with his colleague Minister Eoghan Murphy T.D. in providing political leadership on improving the supply of quality affordable homes for families, ending the homelessness crisis and regenerating communities.

He was previously Minister for Skills, Research and Innovation from 2014 to 2016, working in the Department of Education and Skills & the Department of Jobs, Enterprise and Innovation. This role involved developing Governments Science Strategy, ‘Innovation 2020’, which will keep Ireland at the forefront of R&D, drive innovation to 2025 and in the process build a pool of world class highly skilled researchers in Ireland. He was also involved in the expansion of the Apprenticeship system in Ireland and oversaw the publication of the National Skills Strategy.

An experienced member of Dáil Éireann, he is a former Chairman of the Oireachtas Joint Committee for Jobs, Enterprise and Innovation, and its predecessor the Oireachtas Committee for Jobs, Social Protection and Education. Damien was first elected to Dáil Éireann for Co. Meath in 2002, becoming its youngest member, and again for Meath West in 2007, 2011 and 2016. He was a member of Meath County Council from 1999 to 2004.

David joined the family auctioneering business over 25 years ago and has vast experience in the property and valuation market. He is now Managing Director of Property Partners McDonnell in Mullingar and holds a Bachelor of Agricultural Science (B.AGR.SC), certificate in residential estate agency as well as a certificate in property Valuation & professional code of conduct.  Having joined IPAV in 2006 and qualified as a Recognised European Valuer (REV) in 2013.  He was elected to IPAV’s national council in 2014. He was elected IPAV’s Junior Vice-president in June 2017, senior Vice-president in June 2018 and elected President in June 2019.

Based in Dublin, Dr. Clinton advises family-controlled enterprises on strategies for the successful continuity of their enterprises, with a focus on succession transitions and preparation of the next generation. He advises and facilitates conversations for business families on the topics of leadership, succession planning, governance, next generation development, entrepreneurship and innovation, and organization restructuring. As a faculty member at Dublin City University, Dr. Clinton is the director of the National Centre for Family Business, a leading European family business centre that offers expertise to family enterprises in Ireland and abroad. He leads the Centre’s education programs, conferences, and network of family businesses. He is also an associate professor of Entrepreneurship at Dublin City University where he teaches executive students and MBA students in the areas of entrepreneurship, innovation, and family business. He is an award-winning teacher, having received international excellence awards for his teaching. He has delivered a keynote address at the Post-Davos Conference on ‘Preparing the Millennial Generation for Leadership’.

Dr. Clinton’s research focuses on strategic entrepreneurial practices in family companies, particularly how entrepreneurial and innovative mindsets within family businesses pass to the next generation. His research has been funded by the European Union, Irish and British governments, European family enterprises, and international professional service firms. His findings are published in more than 25 international journals including Entrepreneurship Theory and Practice, Strategic Entrepreneurship, Family Business Review, and Journal of Business Research. Demonstrating the practical relevance of his research, Dr. Clinton has advised governments in Europe, Asia, and North America on developing multigenerational family enterprises. He is a board member of Babson College’s Global STEP Project, the largest family business research project globally, which explores entrepreneurial practices in family companies by forming partnerships between family business practitioners and academic scholars.

25 years ago, Marie Hunt established the research department at CBRE Ireland, which is now regarded as one of the most authoritative sources of property information in the Irish market.  A regular commentator in the Irish media on property matters, Marie produces a range of property market publications and carries out specialist consultancy work on behalf of a broad range of institutional, private and public sector clients of the Irish business.  Marie is an Executive Director of CBRE in Ireland and a member of CBRE Ireland’s Executive Committee. Marie is a chartered surveyor and a Fellow of the Society of Chartered Surveyors, Ireland.

Roger has been Vice President and is now Chairman of TEGoVA, 70,000 Valuers across Europe, a current board member and the Vice Chairman.  Roger is also a recognised European Valuer. Roger has extensive experience of rating valuation for local authority clients.  He also deals with valuation advice to local authorities and major private companies and corporates. Roger has made numerous appearances at Valuation Tribunal and expert evidence at Upper Chambers.

Roger is an established speaker on the commercial conference circuit, and is a RICS Registered Valuer. Roger has extensive knowledge of rating valuation and as a member of a number of institutes; he is able to ‘first hand’ gain information in relation to changes in legislation and is involved in central Negotiations.

Roger's firm undertakes many thousands of regulated valuations every year – so he is keen to look at what Brexit might mean.

Pat has worked in the auctioneering industry for over 30 years. Currently CEO of IPAV, in the absence of any national valuations standards in Ireland he spearheaded the introduction of the ‘Blue Book’ European valuation standards in 2013. These standards are recognised by the Irish Central Bank and the European Central Bank for which they hold default status.  He has overseen the growth of a comprehensive system of professional education and development for members and for those wishing to enter the profession.

For more details on the event or to purchase tickets please click on the following link European Valuation Standards in a Post- Brexit Europe – What will valuers need?